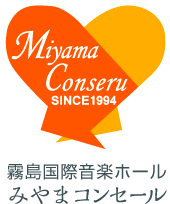 Gerhard Bosse, the first concert master of the Leipzig Gewardhaus Orchestra, visited Kagoshima in 1975. He proposed the holding of a music festival to invite prominent music lecturers from other countries to hold classes and recitals for budding music students who are unable to further their studies overseas due to financial constraints, as well as to provide a platform for people-to-people interaction.

His idea was adopted and the first Kirishima International Music Festival took place in 1980, with participants hailing from not only Kagoshima but all over Japan. The festival, which aims to respect the academic traditions of orthodox music, attracts teachers and musicians of top caliber from all over the world to conduct training classes for students. At the same time, the festival also features a myriad of top quality recitals by outstanding performers. The Kirishima International Music Festival, with its combination of master classes and recitals, is one of the oldest music festivals in Japan (35 years of continued running in 2014), and it has since earned a high reputation.

On the other hand, the festival has also contributed greatly to the development of regional culture, and on a national scale, to raising the popularity of music and its education, as well as to the promotion of international cultural exchange.

In addition, many of the pupils who once attended classes here have gone on to become world famous musicians. Among them, Tanaka Masahiro has participated in this festival as a tutor, while other musicians such as Kikuchi Kazuya, Suzuki Rieko, and Shinozaki Tomomi, had given performances at this festival.

Besides receiving thorough tutorage from in their instruments, some tutors also hold master classes which are open to the public. There are also plenty of opportunities for the students to put into practice what they have learnt in class, such as performing in lobby concerts around the prefecture; selected students can also perform in concerts and participate in ensembles and orchestras.

This music festival boasts a full program of top quality concerts, including chamber music ensembles featuring collaborations by some of the very best musicians, and festival orchestras and choruses made up of professional artistes, master class pupils and local musicians. On top of that, there are also lobby concerts held at the Kirishima Jingu Shrine, hotels, and local elementary and junior high schools, produced by the professional artistes. All of these concerts and events reflect the high standards of the Kirishima International Music Festival.